ALL SOULS CHURCH OF BRAINTREE, UU 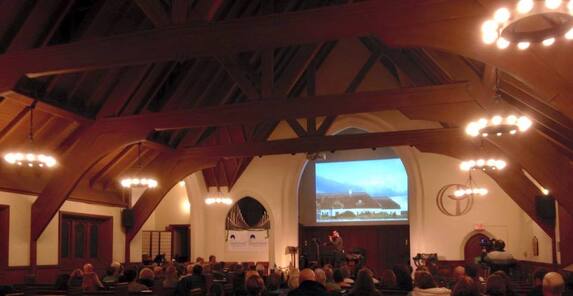 The first attempt to introduce Unitarian preaching to Braintree was made in 1833. A Society was formed, the First Unitarian Religious Society in Braintree. The first preaching of the Universalist interpretation of the Bible was heard sometime in the year 1835. In 1859 a liberal religious movement was organized by the Rev. George Thayer. This was known as the Braintree Free Church. They met until the end of the Civil War when the church was disbanded because most of the members perished in the war.

On November 21, 1886, a group of Braintree residents interested in forming a liberal church met at the Town Hall. By-laws were adopted January 29, 1888. Among the signers were Daniel Cain and Henry Arnold. There was discussion as to whether it should be called Unitarian but as no Unitarians came forward, it was called First Universalist Parish of Braintree.

In 1898 Mr. Fred O. Ellis conceived the idea that a town with a population of 5080 should have a broad and liberal Unitarian Church as well as a Universalist Church. It was to be a place where people without regard to class, creed, or color might come together on Sunday morning to listen to good music and an interesting and instructive talk on religious subjects. When the Unitarians held their meetings at Cochato Hall it was well known that they had Universalist sympathy. At the first service in Cochato Hall, there were 127 persons present despite an easterly storm.

United church services of the two societies began September 23, 1900. At this time All Souls Church requested affiliation with the American Unitarian Association and the Universalist Church of America. Mr. G.H. Arnold wrote "When there was a Unitarian Church in Braintree, I was a Unitarian: when a Universalist Church or parish was organized, I was a Universalist." The Universalists kept their parish organization until 1904 when all funds were turned over to the Building Committee of All Souls Church. The first minister, The Rev. Frederick Griffin, was ordained and installed on June 13, 1902 at Cochato Hall. The Rev. Samuel Eliot, President of the A.U.A., gave a prayer as did Rev. Mr. Edward Everett Hale, chaplain to the U.S. Senate.

The present building was dedicated on April 18, 1905. The architect was Edwin J. Lewis of Boston. Miss Harriet Thayer gave the land. The stone for the Church came from the estate of Mr. George Wales. In 1957, the classroom space was built beneath the church. Following a devastating fire in 1970, the church rose like a phoenix from the ashes. All Souls has been served since 1901 by 11 settled ministers. Centered in religious faith, All Souls Church continues to have a strong and active presence in the communit﻿﻿y.  We are the beneficiaries of a marvelous Unitarian Universalist tradition that has been cultivated and passed down through the generations.

We are also the beneficiaries of a striking historic church - a landmark in our community and a marvelous sanctuary for our services as well as other programs and activities.  All Souls Church is on the National Register of Historic Places.
﻿